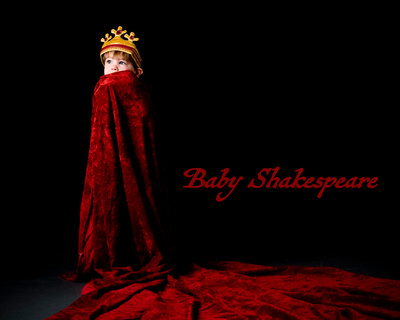 Uneasy lies the head that wears a crown + Baby Shakespeare

at Euclid Park in Cheverly, Maryland

Bring your children of any age for a fun photo shoot in the park!  I'm working on a personal creative project, and I'd love to have your beautiful children participate.  I'll provide beverages and snacks, and, after the work is done, a print from the session for each child's family.  See details below, and sign up if you'd like to come!

About the artist and the project:  Teresa Castracane is a portrait and fine art photographer, as well as a classically trained actor with a specialty in Shakespeare. In Baby Shakespeare, she seeks to create a series of images illustrating key scenes from Shakespeare’s plays, in which the characters are portrayed by children. The goal of the project is to express our common humanity and vulnerability, by combining the power of Shakespeare’s stories with the innocence of children. In addition, inviting children to participate in creative role-playing for the photo sessions introduces them to the works of Shakespeare in an engaging and fun way.

About “Birnam Wood”: The idea for this photo session comes from Macbeth. In the play, the proud and ambitious Macbeth receives a prophecy that he shall not be defeated in battle until Birnam Wood comes to him at Dunsinane:

“Macbeth shall never vanquish'd be until
Great Birnam Wood to high Dunsinane Hill
Shall come against him.”

In the end, the violent King Macbeth is, in fact, defeated in battle, after Malcolm brings a force against him who he has instructed to carry tree branches in front of them, as camouflage.

“Let every soldier hew him down a bough

The moment to be depicted in the photograph is Malcolm’s army (portrayed by children), emerging from the woods, ready for battle, each carrying a branch for camouflage. (The children will not be asked to do any battling, make-believe or otherwise, though they will unquestionably look VERY FIERCE.)

Specifics of the shoot: